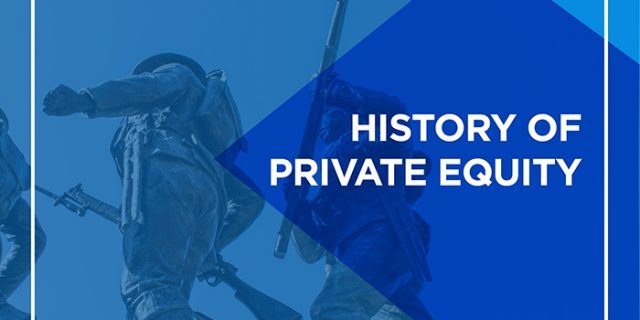 What is considered private equity today? The truth of it, is that only after World War II private equity investments began to emerge. These investments were triggered by the founding of the first two capital firms in 1946: American Research and Development Corporation (ARDC) and J.H. Whitney & Company.

Georges Doriot, also considered to be the father of venture capitalism, was the founder of ARDC along with Ralph Flanders and Karl Compton. ARDC was found in order to encourage private sector investors to invest in businesses that were run by soldiers returning from WWII. ARDC played a very important role in the evolution of private equity. It was the first private equity investment firm that raised their capital from sources other than wealthy families. The first major venture capital success story was accredited to ARDC in 1957 when they invested $70,000 in Digital Equipment Corporation (DEC). In 1968 after the company’s initial public offering the firm was valued at over $35 million. As time passed former employees of ARDC established several successful venture capital firms such as Greylock Partners, Holland Ventures and more. ARDC was actively investing until 1971 when Doriot retired, successively merging ARDC with Textron in 1972, after investing in over 150 companies.

J.H. Whitney & Company was founded by John Hay Whitney and Benno Schmidt. Whitney founded Pioneer Pictures in 1933 and acquired a 15% interest in Technicolor Corporation along with his cousin. Whitney has been investing since 1930s but his most famous investment by far was in Florida Foods Corporation. The company developed an innovative method for delivering nutrition to American soldiers. The firm was subsequently sold to The Coca-Cola Company in 1960. J.H. Whitney & Company continued to make investments in leveraged buyout transactions and managed to raise $750 million for its sixth private equity fund in 2005.

Venture capital investments (originally known as “development capital”) were mainly the domain of families with substantial wealth before World War II. It is also worth mentioning that one of the first steps toward a professionally managed venture capital industry was the passage of the Small Business Investment Act of 1958 which officially allowed the U.S Small Business Administration to license private “Small Business Investment Companies” (SBIC) which in turn helped the financing and management of small business in the United States. The main agenda of the SBIC is to facilitate the flow of capital through the economy up to the pioneering small concerns in order to stimulate the U.S. economy.

From 1984-1991 the real growth of Private Equity surged when Institutional Investors started investing a small part of their trillion-dollar portfolios into Private Investments – specifically venture capital and Leverage Buyout Funds.

Private equity plays a pivoting role in building more sustainable businesses, creating jobs and delivering genuine growth. PE has a rich history, if you are interested in types of PE you can read more here.

Here at Hess Group International we do not use the term “Value Creation” lightly. It is a definable and understandable concept which lies deep in the companies roots where we aim develop companies on a turnkey basis.